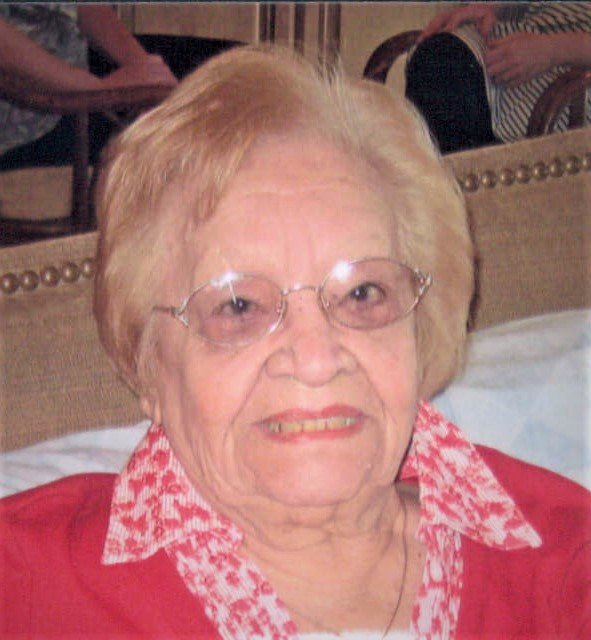 Please share a memory of Rosa to include in a keepsake book for family and friends.
View Tribute Book
Rosa Roman of Bayville, NJ devoted mother, grandmother and great grandmother. left us to be with the Lord on Saturday, June 13, 2020 at the age of 96, surrounded by her family and wrapped in Love. Throughout her life, Rosa lived in Brooklyn, New York, Bloomfield and Toms River, NJ. She worked as quality control Inspector at Canrad-Hanovia in Newark, NJ. Upon retiring she lived for a decade in Texas and then returned to New Jersey. Rose is survived by her beloved daughters, Grace Esposito, Esq., and her husband Salvatore of Bayville, Rachel Kennedy and her husband Pastor Terrance, of Pflugerville, Texas, Helena Roman of Broken Arrow, OK, and Ruth Noll and her husband Robert of Whippany, NJ; her ten cherished grandchildren, Robert Esposito Ferucci (Frances), Angela Esposito Rivera (Jonathan), Laura Kennedy Cervantes (Brandon), Douglas Kennedy (Amanda), Edward Roman Holmes (Amelia), Michael Roman, Robert and Jeffrey Noll, Rosie and Crystal Roman; her much loved great grandchildren, Cristina and Bobby Ferucci, Chloe and Zoe Rivera, Carly, Caylee, Caleb Cervantes, Graham Kennedy and Nicolas Holmes. She will also be missed by her favorite cousins, Georgie, David and Louis Roman. Rosa was predeceased by her son Nicholas Roman and her daughter, Linda Roman. She will be deeply missed for all her love and support and the beautiful life she created with us. She was an amazing lady loved by all. Visitation and services will be held privately for the immediate family with her son in law Pastor Terrence Kennedy officiating at Kedz Funeral Home of Toms River, NJ. Private interment will follow at St. Joseph’s Cemetery in Toms River.

Share Your Memory of
Rosa
Upload Your Memory View All Memories
Be the first to upload a memory!
Share A Memory