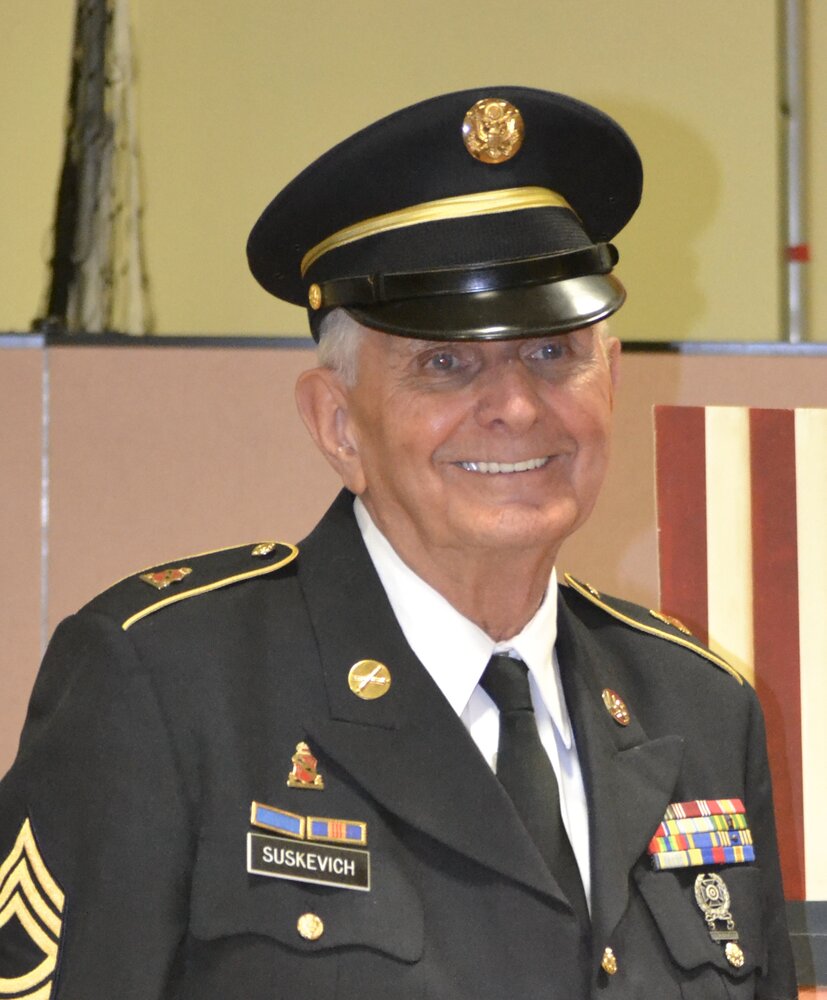 Obituary of William A. Suskevich

Please share a memory of William to include in a keepsake book for family and friends.
View Tribute Book
William Alexander Suskevich, a mentor to many and a friend to all, went home to be with our Lord on, Thursday, October 7, 2021. He was 83 years old. Born in Newark, NJ to Alexander William Suskevich and Katherine Reynolds Suskevich, he was the eldest of seven siblings, four brothers and two sisters. He was educated in his hometown of Newark, NJ at Sacred Heart Grade School and Seton Hall Prep High School. He received an Associate's Degree from Vincennes University and a Bachelor's Degree from Georgian Court University. He was a true patriot and served our country as a member of the United States Army National Guard for 32 years. He loved to mentor the young men and women under his command at the National Guard Armory in Toms River. He made lifelong friendships throughout his years of proudly serving our country and was a proud member of the GOP. In his later years, he enjoyed his time as Inspector of the Casino Control Commission. His life’s true passions were his bride of 63 years, his seven children, 18 grandchildren, and 3 great-grandchildren. His faith was very important to him and his devotion to our Lord was a daily part of his life. He loved being an Alter Boy as well as singing in the choir at Sacred Heart, Vailsburg in Newark NJ. He loved attending mass at St Joseph’s in Toms River where he was a parishioner for over fifty years. It was very important to him to have his children receive a Catholic education just as he did and worked hard to send them all through St Joseph’s Grade School and Monsignor Donovan High School. He loved fishing, crabbing, and seining, and spent a great deal of time on or near the water with friends and family. An avid sports fan, he loved spending time watching sports both live and on TV, especially cheering on his beloved Mets, Jets, and Nets. But nothing was more important to him than attending his children and grandchildren's sporting events and activities. He loved horses and was a big fan of harness racing at the Meadowlands. He enjoyed live music and spending time at concerts with Cookie. Some of his favorites were Hank Williams, Alan Jackson, Kenny Rogers, Fleetwood Mac and the Beach Boys. His Russian and Irish roots were very near and dear to his heart and he enjoyed spending time with extended family in South River. After meeting Cookie and embracing the rich Italian heritage he discovered through his love for her, he went on to become an active member of the Italian American Cultural Society, including the role of president for Ocean County chapter. A generous, caring man, William was blessed with a full life, memorialized by an extensive lineage. He is survived by the love of his life, whom he loved since he was fourteen, Eleanor “Cookie” Monaco Suskevich; Seven children and their spouses: Catherine Rodriguez (husband Anthony), Holly Grassia (husband Vincent), Carol Mazone (husband Kevin), Mary Long (husband Patrick), Eleanor Suarez (husband Ronald), Christine Courtney (husband James), and Robert Suskevich (wife Jennifer); Eighteen grandchildren and their spouses: Nicholas and Vincent Grassia, Ashlyn Mazone-Lucas (husband Jacob), Christl Brnilovich (husband Samuel), Samuel Mazone (wife Brittany), Kylie Mazone (fiance Daniel), Maria Mazone, Robert and Michael Saunders, Gianna Long, Alexander, Ronald, and Theodore Suarez, James, Sean and Emma Courtney, Brianna and Ryan Suskevich; and three great-grandchildren: Owen Smith, Neil Brnilovich, and Lorenzo Mazone. Beyond descendants, he is also survived by brothers John (Marilyn) and Victor (Debra) Suskevich, and sister Katherine (Robert) Czekaj. Bill is preceded in death by his parents, Alexander and Katherine Suskevich, brothers Robert and Peter, and sister Carol. Visitation will be held at Kedz Funeral Home, Hooper Ave, Toms River on Wednesday, October 13th, from 4 pm to 8 pm. Funeral services will be held at St. Joseph’s Church, Hooper Ave, Toms River on Thursday, October 14th, at 10 am. Burial will follow at St. Joseph’s Cemetery, Cedar Grove Rd, Toms River. Messages of condolence are welcomed at kedzfuneralhome.com.

Share Your Memory of
William
Upload Your Memory View All Memories
Be the first to upload a memory!
Share A Memory