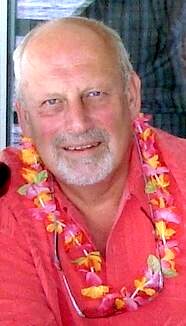 Please share a memory of Jerome to include in a keepsake book for family and friends.
View Tribute Book
Jerome J. Barnett, 67, died December 7th, 2021, surrounded by family and friends in Pine Beach, NJ. Jerry was born in Philadelphia, Pennsylvania, to David and Jane (Volrath) Barnett. His family moved to Toms River, NJ, in 1965. Jerry attended Toms River North High School, where he was a formidable linebacker for the Mariners football team. Jerry was a member of the Toms River Boy Scouts, Troop 52 where he earned his Eagle Scout badge. He married his wife, Donna, in 1996 and began living in Pine Beach, NJ. His long career in providing burial services began at St. Joseph’s Cemetery in 1969. He also worked at Riverside Cemetery for more than 52 years. Jerry helped found Project Heal, which eventually became Caregivers, a group dedicated to serving the homebound elderly. He was also a member of the Toms River Knights of Columbus. Jerry, along with his wife Donna, was a member of the Pine Beach Yacht Club and enjoyed many hours boating on the Toms River. He was a past Commodore of the club Football was another passion for Jerry—he was a tireless supporter of the Giants. Jerry was predeceased by his parents, David and Jane Barnett and siblings, Robert Barnett and Sheryl Barnett. In addition to his wife, Donna (Martino), Jerry is survived by his brothers, Richard (Lucy) and Edward; sister, June; and nieces and nephews—Elliot and David Barnett; Lauren Gorda; Luke, Sam, Nick Martino, and Audra Yacka. He will be much missed by his mother- and father-in-law, John (Pop) and Marie Rice, and sisters- and brothers-in-law, Joann and Jim Everett and Lou Martino and Virginia Dooley. Jerry had a big laugh and told great stories. His huge heart and boundless kindness will be missed by all. A funeral mass will be held on Saturday, December 18, 2021 at 9:00 am at St. Joseph’s Church, 685 Hooper Ave., Toms River. Donations to food pantries can be made in honor of Jerry.

Share Your Memory of
Jerome
Upload Your Memory View All Memories
Be the first to upload a memory!
Share A Memory