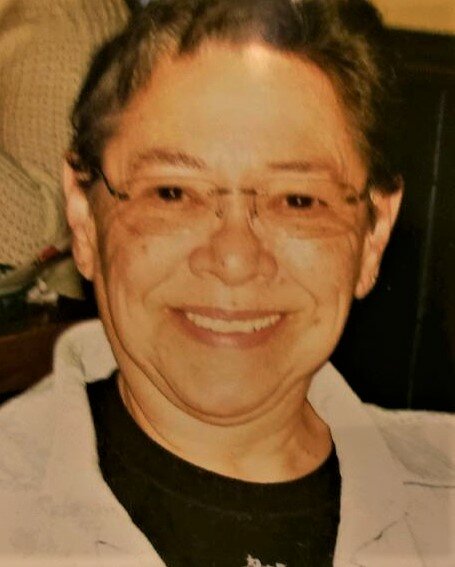 Obituary of Catherine A. Patla

Please share a memory of Catherine to include in a keepsake book for family and friends.
View Tribute Book
Catherine A. Patla (nee Finck), 76, passed away peacefully in her sleep on Friday, February 25, 2022 after bravely battling cancer. She was born on April 27, 1945, in Newark, New Jersey, and was preceded in death by her mother, Anna Kuklevich Baldwin (nee Nicola), Henry Finck (her biological father), Henry Kuklevich, who she considered her true father, and her brother, Andrew Kuklevich. She is survived by her two loving daughters, Christine Dilkes Cook and her husband, Kerry of Washington, NJ; Jennifer Mokrzecki of Greenwood Lake, NY; and her beloved granddaughter, Chelsea Dilkes of San Francisco, CA. Kathy, as she was known to her family and friends, grew up in East Newark, NJ and graduated from Harrison High School in 1963. She went on to have her two daughters, and after her divorce, she embraced the challenges and financial adversities of raising children as a single parent. She worked for many years as a clerk in the record department of Two Guys Department Store in Kearny, NJ and later in the cash office in the East Hanover, NJ location. When Two Guys went out of business in 1982, she worked nights while taking typing classes and learning data entry during the day. She then went to work for Maersk Line shipping company, first in Port Newark, NJ and later in Madison, NJ, where she worked for over 20 years, retiring in 2006. Measuring 5 feet tall on a good day, Kathy was short in stature, but tall in character and personality. She was fiercely loyal to her friends and family and she loved unconditionally. Her other great loves were seafood, especially crabs, which she would often catch herself after a day of crabbing with friends, and slot machines. Mistrustful of banks, she took to stashing her gambling winnings in empty cough drop bags and hiding them around the house where she promptly forgot where they were hidden. Her family learned to never throw out a cough drop bag without examining its contents. It has been said that she never missed a seafood meal, she never passed a casino without playing the machines, and she never hesitated to complain about something she didn’t like. She was an avid hoarder of plastic bags, which she learned to fold into neat little squares to save room, and she was a proponent of wearing cargo shorts year-round. Ever skeptical of the soft drink mark-up in restaurants, Kathy was also known to carry her own beverage everywhere she went. We believe these quirks came from her days as a single parent when money was tight, and she couldn’t afford pant legs or beverage refills. Similarly, she stocked her car with various goods and sundries in case of the Apocalypse, or in case she might need cinnamon, toilet paper or laundry detergent while she was visiting friends and family. During the pandemic, people came to her for toilet paper when the stores ran out. Kathy was always very generous to her family and friends. She was quick to lend a helping hand, to listen or comfort in a time of need, or be a travel companion on a moment’s notice. To say that her family and friends will miss her greatly is an understatement. In lieu of flowers or cards, donations can be made to: PFLAG at http://pflagjerseyshore.org/ or the American Cancer Society, P.O. Box 22478 Oklahoma City, OK 73123 At her request, there will be no memorial service or funeral. A celebration of her life will take place at a later date.

Share Your Memory of
Catherine
Upload Your Memory View All Memories
Be the first to upload a memory!
Share A Memory